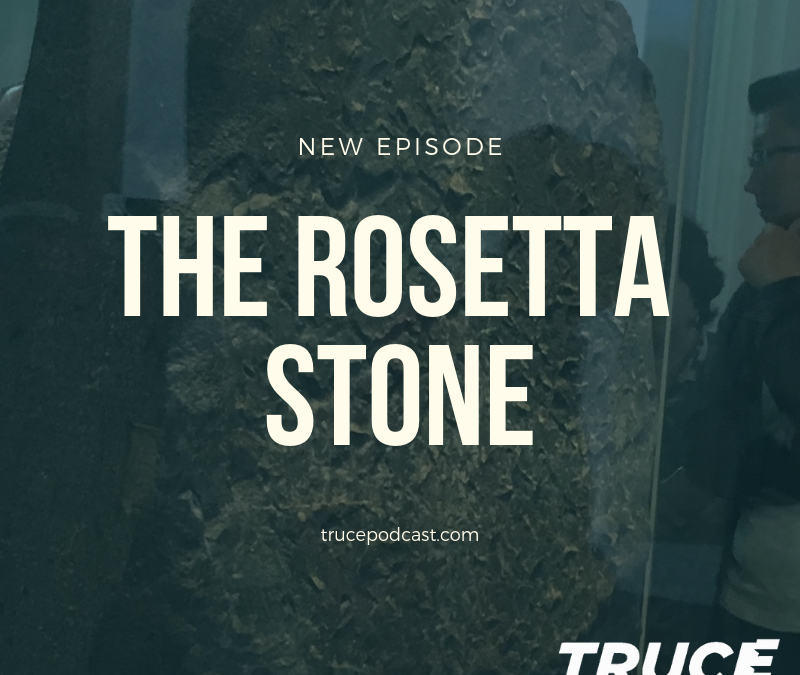 Michael Chandler came to Kirtland, Ohio bearing treasures of ancient Egypt. It was the 1800’s and the world had gone crazy for artifacts. The problem was that nobody could read Egyptian. So Chandler sought out a brilliant young man he’d heard had a special connection with God Himself.

This week we examine the strange historic connection between Joseph Smith, founder of the Mormon Church, and the Rosetta Stone.

Some of the information for this episode came from Fawn Brodie’s excellent book No Man Knows My History. We also included a reading from the official LDS church history in which Joseph Smith says that the abolition of slaves was bad for the country. You can find that in volume 2, chapter 30, page 436.

You may also enjoy Joseph Smith Among the Egyptians, by Wesley P. Walters. This important artifact can now be seen at the British Museum in London. Photo by Nick Staron.

Michael Chandler visited north eastern Ohio in the summer of 1835. Which must have been quite a sight to see. Ohio back then was the wild west. At the cusp of a population boom as families risked life and limb to look for wide open spaces. Cleveland had only 1,075 people living there five years earlier. The big city in the region. Kirtland was much smaller. Visitors like this one would have been incredible.

Because Chandler brought with him wonders of Egypt. He’d been touring the country with Egyptian mummies and papyri. They had Egyptian hieroglyphics on them. Foreign squiggles and pictures that must have meant… something. The nation’s hunger for artifacts was insatiable. Fortune hunters looted the wonders of Egyptian tombs. There was money to be made in artifacts.

Michael Chandler made money showcasing wonders of the Egyptian world. He just didn’t know what these papyri said. Didn’t know if anybody could tell him. He cam e to Ohio to seek a brilliant young man he’d heard about. A guy who studied languages. Some said he had a special connection with God himself1.

The young man in question, Joe, said he’d try to translate these documents. He lit his lamps, went to a quiet place, and tried to decipher a lost language. Or, at least, fake it until he made it.

You’re listening to the show that uses journalistic tools to look inside the Christian church. We press pause on the culture wars… except maybe today… today we’re going to need to speak a little hard truth in order to explore how we got here and how we can do better. I’m Chris Staron. This is Truce.

We recently released an episode about the book of Daniel in the Old Testament of the Bible. It has all of these prophesies that were fulfilled during the time of Alexander the Great.

Including one that is so specific that it’s enough to give you goosebumps.

“He will set his face to come with the power of his whole kingdom, bringing with him a proposal of peace which he will put into effect; he will also give him the daughter of women to ruin it. But she will not take a stand for him or be on his side.” (Daniel 11:17 NASB)

The prophesy says that the king will propose peace to his enemy by giving his enemy a woman. He’ll gift a human being in order to build a bridge. Like, she’s a bouquet of flowers or fruit basket. His hope is that she’ll be working for him, but she eventually turns against him.

Which makes sense because, who wants to be used as a fruit basket?

That’s what the Bible predicated hundreds of years before the event. This thing actually happened.

The king of the north, of Syria and Jerusalem, traded his daughter, Cleopatra I. Hoping that she’d help him topple the king of the South, or Egypt. Cleopatra married Ptolemy V in 197 BC.

Ptolemy V married Cleopatra. Ptolemy was worshipped as a god. There was a royal cult at the time with priests and decrees, and the whole thing. On the first anniversary of his coronation, when he was just 13-years old, a council of priests in Memphis wrote an inscription on stone. Supporting the worship of the king.

It was so important that they wrote it down in three languages. Hieroglyphs, Demotic (the native Egyptian language), and Ancient Greek. And they made copies and them distributed to different temples.

Then the world moved on. As it so often does. There were battles to be fought. Lands to conquer. A new religion started following a man who claimed to be God, died on a cross, and rose again. Empires fell. The United States was formed, but just barely.

Then Napoleon Bonaparte headed south for a little world domination. To, guess what? Egypt. Where a large stone was discovered by soldiers in 1799. They found it while digging a foundation to expand a fort. It was lodged into a wall.

Napoleon was defeated and under the terms of the treaty, the stone became the property of the British. Where people did their darndest to read hieroglyphics. Mankind had forgotten how. But we learned.

In September of 1822 a French scholar announced that he’d begun to decipher this language. Because this tablet that had been found, that the British now had, had three different languages on it. Three different languages describing the same thing: the worship of Ptolemy V. Husband of Cleopatra I, whose marriage was foretold hundreds of years earlier in Daniel 11. A mystery translated when they cracked the code of the Rosetta Stone.

Joseph couldn’t figure it out. Not word for word. He’d tried, and failed, to write out an Egyptian alphabet. He’d already deduced that these were writings by the Jewish patriarchs Abraham and Joseph, of Technicolor Dreamcoat fame. Somehow. And people expected that if he could decipher who wrote the document, surely he could tell them what it said. He couldn’t do it by direct translation. He relied, instead, on divine inspiration to translate the document he said was written by Abraham.

The Book of Abraham was published in 1842. It includes a creation story. Instead of “God created the earth” like you might see in Genesis, his said, “The Gods organized the earth”2. The Gods. Plural. He said that there was a star, Kolob, closest to heaven. That Kolob and countless others are populated. By spirits. Eternal spirits. He’d gotten this idea from a book he’d read and adapted it to fit his own needs, like he’d done a few times before.

This was the 1800’s. Pre-civil war. People wanted to know… why were there different races? Where did black people come from?

Joe said they came from the curse of Ham. That, when Noah cursed the line of Ham in the book of Genesis, it showed on their skin. Turned them black. Of course, Noah didn’t curse Ham in Genesis. But that was what people wanted to believe back then. Some of them, anyway. Some backwards evangelicals and… Joe.

Joe wrote a letter, which is now in the official church history, volume 2, chapter 30, page 436. He said the position of abolitionists who wanted to set African slaves free had, “calculated to lay waste the fair states of the South, and let loose upon the world a community of people [meaning, black people], who might, peradventure, overrun our society, chastity, and virtue.” He finished by writing that, “we have no right to interfere with slaves, contrary to the mind and will of their masters.34”

The young man, the racist guy who supported the slaveholders, the guy who said he could read the exact words on the papyri… was Joseph Smith, founder of the Church of Jesus Christ of Latter Day Saints. The Mormon church. And unlike the golden plates which were supposed to contain the book of Mormon and then conveniently disappeared, the Egyptian papyri stayed around.

Someone was bound to translate them.The book of Abraham made so many claims, some of them really important to this new faith. The first to translate Joseph’s papyri was Theodule Deveria. He published the two different translations next to each other in 18615. Joe’s on one side and his on the other.

One told the story of Abraham, of the patriarchs, the stars, and spirits. The other, Theodule’s, was an ordinary funeral document, the one Joseph intended to decode, wasn’t special. It was a just a funeral document. Like you might find in any ancient tomb. Certainly not a letter from God.

The result is that we know that Joseph Smith didn’t actually translate the text of that ancient paper. He claimed that he’d translated the words on the page. But… he hadn’t. Instead, he wrote down an amalgamation of different stories he’d read in other texts. Cobbled them together and claimed it was the word of God written by Abraham.

Here is why history is important. Because lots of people follow the teachings of Joseph Smith, many of them believing they are true Christians following orthodox theology.

Thanks to Ptolemy, Napoleon Bonaparte, the French, the British, and the Rosetta Stone… we know the truth. That Joseph Smith… well… he didn’t unlock God’s word, written by Abraham. Joseph’s real genius wasn’t in languages, but in showmanship. He hadn’t heard from God. He didn’t unlock the mysteries of the traveling Egyptologist. He just… made it up. Wrote it down. And hoped that nobody would ever learn to read Egyptian.