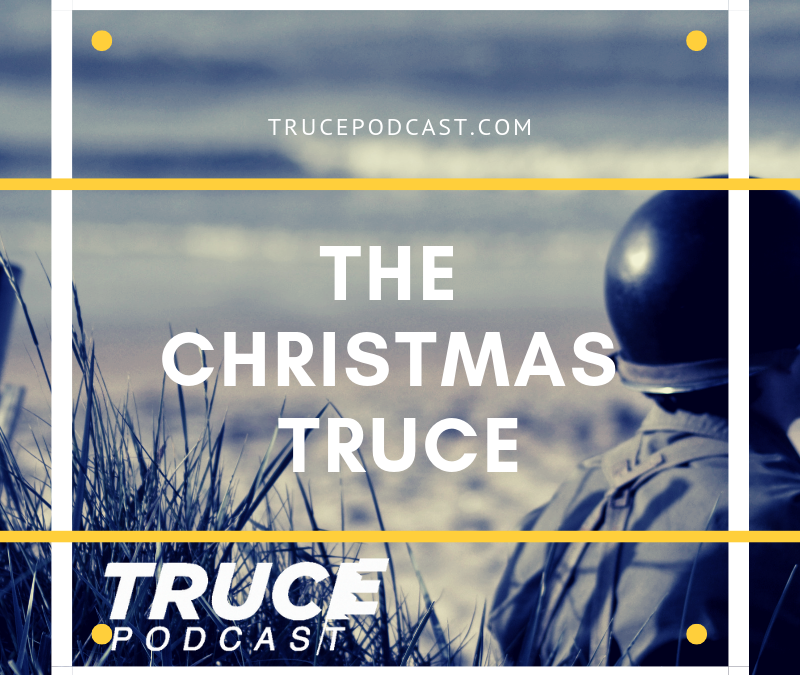 In 1914, near the beginning of WWI, the most remarkable thing happened: men walked out of their trenches and joined each other in the middle. In no man’s land. Thus began the Christmas Truce, the moment when men on the battlefield spontaneously reached out to their enemies.

For more infomation about the truce, check out:

The International War Museum site, including the letter by A.D. Chater, which we could not use due to copyright concerns.
The Professor Buzzkill episode about the Christmas Truce
Our scripture reading was performed by Jasen Banks of the Word x the World podcast.

Captain Chater was in his trench. Surrounded by mud. Wet and old. It was December, after all. He was one of many British men who joined up before the war began. He was a professional soldier, fighting German professionals. The new men who’d signed up after the outbreak of war hadn’t yet reached them.

The first world war was both old world and new. Men on horses with bayonets against machine guns. Primitive tanks. Barbed wire. Poison gas. That first Christmas, the war was still new. There was still plenty of hell to come.

He was in his trench. Ahead of him was a no mans land – a stretch between his fellow soldiers and the Germans on the other side. Only dead men lay between. The possibility of death was always there. Which made what was about to happen that much stranger.

He wrote this in a letter home.

“About 10 o’clock this morning I was peeping over the parapet when I saw a German waving his arms and presently two of them got out of their trenches and came towards us.”

Two men, men who could have been firing at him yesterday, Germans… were on their way over.

You’re listening to the show that uses journalistic tools to look inside the Christian Church. We press pause on the culture wars to explore how we got here and how we can do better. I’m Chris Staron. This is Truce.

We were just going to fire on them when we saw they had no rifles so one of our men went out to meet them and in about two minutes the ground between the two lines of trenches was swarming with men and officers of both sides, shaking hands and wishing each other a happy Christmas.

So here’s what happened. The two men, the two Germans came out their trenches, walked across the no man’s land, and were met by British men who bravely got out of their trenches, shook the hands of the Germans and wished them a happy Christmas. Pretty soon there was a whole crowd gathered around.

It was Christmas, 1914. And soldiers, some French, some British, some German, left their positions and met their fellow men in the middle. Sometimes for hours. Imagine that. Enemies crawling out of their protected spaces after days of warfare only to join each other in the middle and… socialize. This was no isolated incident.

In just 20 miles from the English Channel to Switzerland, there were some 100,000 men who congregated. Not all in one mass, but dotted here and there. Wherever a man was brave enough to step toward certain death, hoping for a few minutes of peace.

They’d called a truce. Unofficially. It just happened. All along the front, they’d heard each other singing Christmas carols. Crouching in the mud, trying to stay warm, praying they wouldn’t get shot. And, from the other side, from the enemy, comes a familiar song. That reminds you of your family, your friends, the girl you left back home. The trenches were so close they could smell what the other side was cooking. Warm food and music.

To be clear, this was not something the British and French war offices had coordinated with the Germans. That kind of official mini-armistice had been documented since the Trojan wars, the American Civil War, the Napoleonic Wars. Higher ups getting together to arm wrestle a deal where both sides could bury their dead or rest. No. This was individuals. A few men waving a flag or shouting from one trench to the other. Daring to dream of a few minutes of peace.

And so they stood in no man’s land. Shaking hands. Burying their dead. There are reports of German clergy saying prayers next to British clergy. Praying for their men, and their fallen enemies. Some soldiers used the break to blow off some steam or attend sermons. Others, like AD Chater, used the time to build a little roof over the trench, a place for a fire, throw down some straw. To make his little nightmare a little more civil.

There are even reports of football matches, which would be soccer to us Americans. There are monuments all over Europe to this moment. Many of them feature soccer balls.

Sometimes the armistice lasted for hours, other places for days. But for a while they weren’t fighting tyranny or conquering lands… they were just men.

I think the Bible story that resonated most with me this year is from Acts 3. Jesus has already been resurrected. God heals a man through Peter while he’s near the temple. And because of that, Peter and John get flooded with onlookers. This is Jerusalem, the city where Jesus was rushed through a kangaroo court, beaten, and crucified, while own God’s people shouted for his death.

Peter has every earthly right to be afraid. These people had killed his master in one of ancient Rome’s most horrific ways. Nailing his body to rough boards. Peter had been there. He’d seen it.

So when this crowd of Jewish people rushes him, he’s got every reason to turn and run. But he doesn’t. He talks to them.

“The God of Abraham, Isaac and Jacob, the God of our fathers, has glorified His servant Jesus, the one whom you delivered and disowned in the presence of Pilate when he had decided to release Him. But you disowned the Holy and Righteous One and asked for a murderer to be granted to you, but put to death the Prince of life.” (Acts 3:13-15 NASB)

Peter straight up calls them out! You guys, you Jewish people, claim to love God, but you let a guilty guy go and killed Jesus instead. Those are tough words. Instead of fleeing, he’s convicting them of their sins. He could insult them. Start an insurrection. Burn their city down. Like they would have expected a proper Messiah’s men to do. He could have told them they were doomed to hell for what they did.

But Peter does none of that.

“Therefore repent and return, so that your sins may be wiped away, in order that times of refreshing may come from the presence of the Lord.”

Instead of condemning these Jewish people, he’s offering them the gospel. He does it in a way tailored specifically to his audience, the Jews, appealing to the prophets and Moses. He spells it out clearly to them. So they’ll understand. That the gospel is not closed. Not even to the people who murdered Jesus.

As we head into Christmas this year, how will we behave? Every year we Christians get wrapped up in nonsense about Starbucks coffee cups, x-mas instead of Christmas, Happy Holidays… and for what? So we can create some mythical “they” out there? A group of people we can blame for society’s ills that’s not us, it’s “them”, “those people”. We always feel like we need an enemy.

What if we called a Christmas truce? Even a little one in our communities, our churches, our homes? If Peter can walk into a crowd of people who crucified the messiah just days earlier and see that they need Jesus just as much as he does… maybe we can drop our grudges and do the same.

Will you… be the first to crawl out of your trench, hands raised, and walk across no-mans land? Is that little mud hole you’ve been living in, that place of hatred, really so great that you can’t leave it?

Will you and I be the first to forget your own needs for a second and think about how much your enemy needs Jesus?

Quit hiding. Stop hurling grenades. Let go of your indignation. Because we’re climbing out of here.