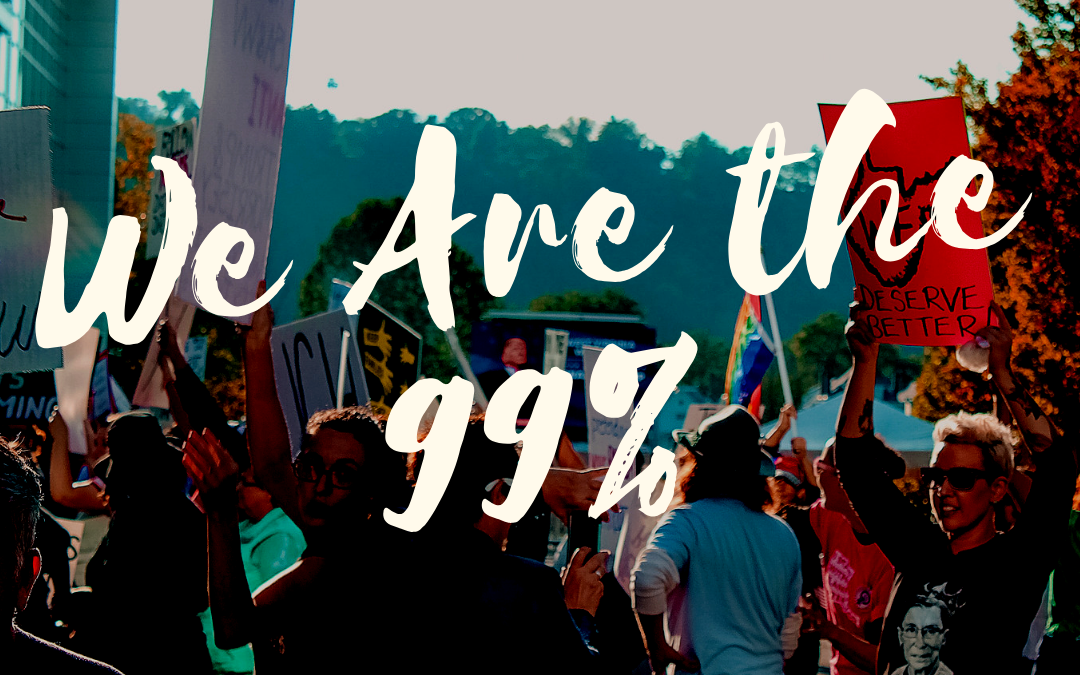 (All unattributed dialogue was read by the host, Chris Staron)

In 2011 a group of revolutionaries took to the streets on New York City. Protesting wage inequality in the United States. Their slogan was “We are the 99%”. The protest made international news. News crews flocked to get video of people camped out in city parks. They photographed posters with catchy slogans and said they stood for the little people. If these are the 99%, these masses of people in parks, who are the 1%? You might be surprised to find the answer.

You’re listening to the show that uses journalistic tools to look inside the Christian church. We press pause on the culture wars to explore how we got here and how we can do better. I’m Chris Staron and this is Truce.

Over the past three episodes, we’ve been exploring the way we interact with money and how that changes the way we treat others. After the stock market crashed in 2008 and a global financial panic struck, the nation blamed the people at the top. Banks failed, bailouts were issued and it seemed like the only people that were injured were the little folks. The 99%. It all comes down to money.

We looked up some facts in the 2018 Credit Suisse Global Wealth Databook. It’s a dense compendium of nerdy facts. Are you ready for this? Let’s say you want to know if you’re in the top fifty percent as far as total wealth. This is across the entire world. To be in the top 50% you only have to have $4,210 US dollars in wealth. That’s it. If you have $4,210 you are wealthier than half of the rest of the world.

CHRIS: Yeah, it’s not much.

CHRIS: Right. So you take all of the money and property and cars and stuff you own and subtract your debt, your mortgage, and student loans. If you’ve got at least $4,210 left after all that, you’re in the top 50%.

TED: How about to be in the top ten percent?

CHRIS: That’s a little bit more. $93,170. Less than half of the national average price for a home in the US. (According to Zillow)

TED: But those protestors were upset about the 1% How much do they have?

CHRIS: If we wanted to pinpoint those people who were being protested by Occupy Wall Street, the 1%, it’s basically anyone with at least $871,320 in total wealth.

To most of us that is still a staggering amount of money. Almost $900,000. We could spend a lot of time nit picking that number… but let’s spend some time examining the 99%. Everyone else.

Let’s say that you are at an upscale banquet. There is music playing.

TED: This is my jam.

CHRIS: People chatting and the place looks fantastic. So do you.

TED: Check out these suspenders.

CHRIS: You went to an upscale place in the mall and bought a nice suit. It cost a little more than you could afford but hey, you get airline miles.

TED: I’ll worry about it next month.

CHRIS: The doors open and in walks the guest of honor.

CHRIS: It is a woman with diamonds around her neck and a dress that could… (CAR CRASH) Stop traffic.

TED: I hope they have insurance.

CHRIS: Finally your number is called.

CHRIS: You grab a plate and help yourself. And a second plate, just in case. There’s a lot of people at this party. You’d better get what you want before it runs out. Some of it already has.

TED: How can they be out of scalloped potatoes?

CHRIS: They’re out of potatoes, so you double down on the dessert.

TED: Creme broule! I don’t know what it is but I’m about to find out!

TED: You’ve really got to try these green beans.

CHRIS: You’ve got it good.

TED: Can you pass the butter?

CHRIS: But behind you is a lot of other people. This is a big party. The people sitting in the back of the hall don’t get any of those green beans. And behind them, is the wait staff who gets to eat the leftovers if there is anything left after the party. The main course is entirely gone. And behind them are the bell boys and front desk clerks hoping that maybe there will be just a little bit of cake they can share. Meanwhile…

TED: Oh, this is too much. I’ve got to loosen this belt.

CHRIS: You’ve gorged yourself. You don’t even finish all of the food you’ve taken.

WAITER: Do you need a to-go box?

TED: No thanks. I’m all finished.

More often than not, we tend to look to people who are better off than us and imagine what it is like to be in their shoes.

TED: I didn’t even know that Rolls-Roice made shoes.

CHRIS: No matter our station in life. We dream of being at the front of the buffet line dressed in in our finest. Someone always seems to have it better. But God calls us to a life of thankfulness and contentment. To enjoy our station in life and not yearn for what others have. 1 Timothy 6:6 says “ But godliness with contentment is great gain. For we brought nothing into the world, and we can take nothing out of it. But if we have food and clothing, we will be content with that”. Americans are really really bad at this. We hire motivational speakers to pump us up:

MOTIVATIONAL SPEAKER: Keep striving, keep achieving and get yours.

CHRIS: This attitude has even crept into the church. It can steal our peace and joy.

CHRIS: The “get yours” attitude has also really hurt our witness. Many of the industrial patriarchs of this country were terrible to their employees, used deceptive means of doing business, polluted the earth and worst of all, tied their businesses to their Christianity. Not a great witness. We lift up the wealthy as an ideal rather than the humble. The proud rather than the meek.

NARRATOR: “As He was setting out on a journey, a man ran up to Him and knelt before him, and asked Him, “Good Teacher, what shall I do to inherit eternal life?” And Jesus said to him, “Why do you call Me good? No one is good except God alone. You know the commandments, ‘Do not murder, do not commit adultery, do not steal, do not bear false witness, Do not defraud, Honor your father and mother”.

CHRIS: Your standard lists of sins. But this guy has been on his best behavior.

NARRATOR: “And he said to Him, “Teacher, I have kept all these things from my youth up.” Looking at him, Jesus felt love for him and said to him, “One thing you lack: go and sell all you posses and give to the poor, and you will have treasure in heaven; and come, follow me.”

CHRIS: Jesus kinda drops the mic on this guy. “Sell all you posses and give to the poor” and “come, follow me”. This is not easy news to hear. Especially if you’ve got a lot to lose.

NARRATOR: “But at these words he was saddened, and he went away grieving, for he was one who owned much property. And Jesus, looking around, said to His disciples, “How hard it will be for those who are wealthy to enter the kingdom of God!” The disciples were amazed at His words. But Jesus answered again and said to them”

CHRIS: Get ready for some repetition.

CHRIS: Wow. That’s rough…. what if we slow down a second here. He’s saying this to a rich guy. It’s easy for us to say, “that’s not me. This is meant for the billionaires.” But… How much do you have to be worth to be in the top 50% of the world? It’s only $4,210. $4,210 and you’re wealthier than half the world. Maybe it should resonate with us when Jesus says: “How hard it will be for those who are wealthy to enter the kingdom of God”.

That could be you and me. It’s easy for us to judge the uber wealthy, the people with the giant mansions… but you’re probably listening to this on an expensive phone or computer. Perhaps drinking something that costs more than what a laborer in Bangladesh makes in a whole day. This isn’t about making ourselves feel guilty. The hope is for some perspective. We, you and I, need to be careful how we view money. Our money. Instead of pretending these verses are for someone else.

CHRIS: We’re called to serve only God. Not riches of this world. Think what a better witness we’d have if we were not so busy chasing after what our neighbors own. The time spent with family and friends if we resisted working overtime. Or if we lived closer to work so we didn’t have so long of a commute. We might not be able to afford such a nice house, but we’d get our life back. It seems to boil down to this: are you serving God or are you serving money?

The American church is often in the wrong place. We take the focus off of God and are ugly to nonbelievers when we are consumed by greed. Especially at the expense of others, the environment and our social responsibility. Lets be a generation of selfless generosity. Of putting others before our own interest. And in the end, a generations that learns to really follow Christ.

This episode was produced and edited by my brother Nick Staron. Thanks to our friends Josh Griffith and Bob Stephenson for lending us their voices. Look us up on social media and at trucepodcast.com. Once you’re on the site you’ll find show notes, previous episodes, and links to my films Bringing up Bobby and Between the Walls and my novel Cradle Robber. We’ll also put links in this episode to Nick’s stand-up comedy. If you’re looking for clean comedy at your next church picnic, college gathering, youth event, or conference look him up nickstaron.com. Hang out for another few seconds and you’ll hear a clip from his recent set.

Truce is a listener supported show. Which means, if you’d like to see this continue, we need your help. You can donate on Patreon, GoFundMe, Paypal, and a bunch of other ways on our website at trucepodcast.com. And please tell your friends about the show. Really! Share about us on Facebook! It would mean a lot.

Thanks for listening. I’m Chris Staron and this is Truce.